In part one of this article, I ended it with the Sun and its part related to Earth, sunrise and sunset. Now we will take a flight towards space, starting from our Sun. In order to understand this article properly (wavelength and stuff), you must first read part one.

As we transition from Earth’s atmosphere to Space we see that the Sun appears white, for the reasons that I mentioned in the last article. Our Sun produces light because of the nuclear fusion reaction going at it. Fusion, the one that produces melodies in music and here in the Sun, it produces light. Hydrogen combines to form helium and in this process, there is a release of energy. That energy comes out in the form of heat and light (photons). It is not an easy journey for a photon. It takes thousands of years for it to reach from the core to the Sun’s surface. It can take even 100 times more than the normal time and it is not possible to exactly pinpoint that how much time it takes as it varies but yes, it takes really long time. The density is high inside, so there are collisions and absorption and re-release of a photon by other atoms present there. This is the way by which all the stars produce light, Sun is a star after all. Then why do we see stars as yellow, red or blue depends on the temperature of a star. Hotter ones are blue and the ones that are cool are red. It’s the game of wavelength, stars that give out the light of shorter wavelength are blue and the ones that give out longer wavelength light are red.

The division of stars written below with respect to temperature shows how the color is related to the temperature (source – outerspaceuniverse.org)

Phases of Moon are because of the sunlight falling on it from different directions.If we see crescent Moon we will also notice that its non-illuminated part shows a particular amount of glow,not so bright, but visible.That is when the Sun’s light is reflected from Earth towards Moon.That glow over the unlit part of a crescent moon is called Earthshine.It is a beautiful phenomenon.In astronomy, a crescent is a shape of the lit side of a spherical body (most notably the Moon) that appears to be less than half illuminated by the Sun as seen by the viewer.

Below is an amazing picture of Earthshine.

Space is dark, but why? We see the light when it is reflected back towards us by anything or we see it coming from a source that produces it. But in the void of space, there is nothing. But here the things get interesting. There is dark matter, where we see nothing, the reason being it can’t be detected yet. What is the point if we are able to “see” it? Then it would become just like the matter that we are able to see. It is still a mystery, we are so sure about its presence because the stars are moving around faster than what would have been possible with gravity alone. There is something else that is affecting their motion, something not visible and thus, we call it dark matter. 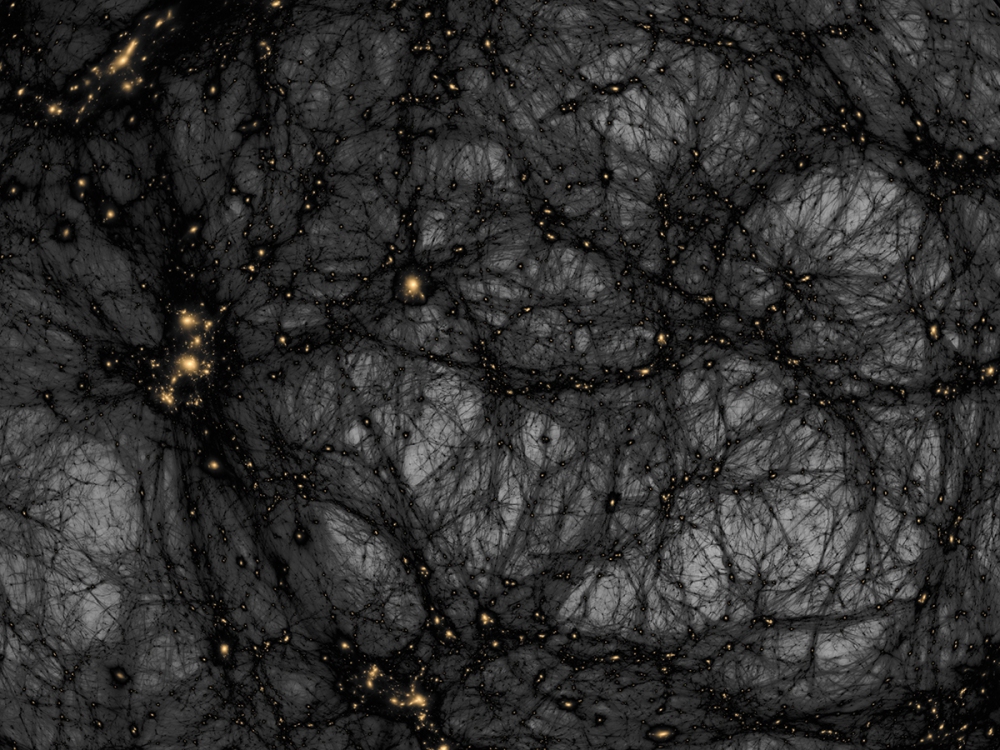 (This image from the Dark Universe shows the distribution of dark matter in the universe, as simulated with a novel, high-resolution algorithm at the Kavli Institute of Particle Astrophysics & Cosmology at Stanford University and SLAC National Accelerator Laboratory.
Credit: © AMNH)

We see many other wonders of light in space. Talk about galaxies, their light is the light of their constituents, i.e. stars and a few other objects like the marvelous nebula. A nebula is a cloud of gas and dust, which glows with beautiful colors caused by different elements in or around them. Collectively, we call them Nebulae. I have never seen anything wonderful than these.

Now, these are of different kinds and such are their colors. These can be categorized as Emission nebulae, Reflection nebulae, Planetary nebulae, Dark nebulae and Supernova remnants.

An emission nebula is a cloud of gas and dust, which glows because the atoms are charged by the energy of a star and when these atoms lose energy they lose it in the form of emission of red light. They are red because hydrogen is in abundance; red is the dominating color, though they can have traces of other colors too. The Orion nebula is an example.

Reflection nebula, as the name suggests, reflects light from a nearby star or group of stars unlike emission nebula (which produces its own light). These are mostly blue because blue light is reflected more. An example is the Trifid nebula.

A planetary nebula is a shell of gas produced by a star when it is near its end. It is illuminated by the star present at its center. These are called planetary nebulae because they just look like one.(Example – The Ring nebula)

A dark nebula is a cloud of gas and dust that blocks the light of a star because of its position with respect to that star. These are usually seen together with emission and reflection nebulae. Horsehead nebula in the Orion nebula is the best example.

Supernova remnants, as the name suggests, are the leftover of a supernova explosion (death of a star). As the star blasts its expelled material forms cloud around its remains. This glows with the remains of the star that exploded. (Crab nebula)

Type “space images” into Google and you will mostly see images of Nebulae.

There are also other objects like pulsars, but these are not visible in optical telescopes as they emit radio waves, not visible to naked eyes. These are highly magnetized neutron stars.

A black hole is the most amazing thing that has ever been known or more precisely, Hypothesized. They have powerful gravity, which doesn’t allow even light to escape!! The reason nothing can escape a black hole is because within the event horizon (it is defined as “the point of no return”, i.e., the point at which the gravitational pull becomes so great as to make escape impossible), space is curved to the point where all directions are actually pointing inside.

Yes, I know, a Black hole deserves a special article and thus that would be my next article. I will also be writing articles about other marvelous celestial objects which we see through the eyes that we have made like Radio telescopes etc.

The beautiful featured image at the top;

An artist has created in a stunning circular image of the entire observable universe using NASA images based on astronomical surveys provided by Princeton University. It’s also quintessentially geocentric – with the Earth’s solar system right at the center.

The South American artist and musician, Pablo Carlos Budassi, captured in his universe map the outer rings of the Milky Way, the neighboring Andromeda galaxy and other star formations, then encircled these star clusters with a ring of plasma left over from the Big Bang.(www.rt.com)

See the full resolution image here,you will be stunned I bet and don’t forget to zoom in after downloading it.

“It is because of the flight of light

We know the Universe

From minutes to million years

Having wings of time

Call it a bird”

Article and poem by